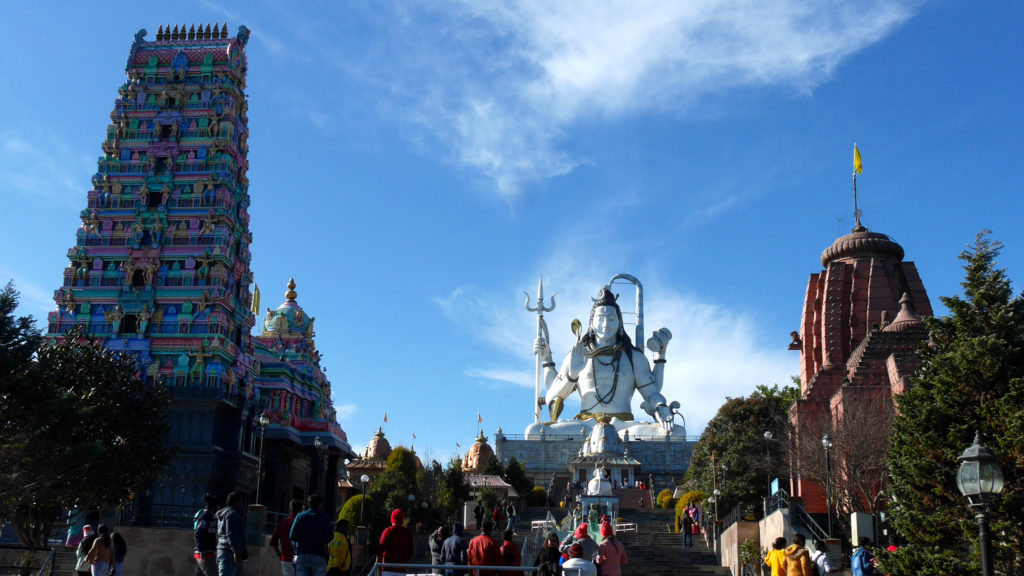 As our adventures in India’s Sikkim continued, our next destination was Namchi. The name Namchi means “sky high” in Sikkimese and we were, indeed, still in the mountains and surrounded by some of the world’s highest peaks. We got to celebrate the change of the decade in this wonderful place. We also learned that Sikkimese people really love to build statues of gods on mountain tops. At these sacred places we got so many blessings and made so many wishes, that the new decade can’t be anything but awesome.

Little town feel in between the mountain tops

Even though Namchi is the biggest city of South-Sikkim, with 38 000 inhabitants, to us it felt more like a little, cozy town. In Namchi’s center there is a small pedestrian area with a few shops and restaurants and a tiny “central park”.

Seri kept on munching momos every day as promised. He found his favorite momos in a small corner shop called Char Dham Fast Foods. Johanna was feeling almost healthy again and had her appetite back. She found her treat of choice in a little café called Kava Café in the form of a chocolate lava cake.

The city is surrounded by mountains, the most prominent of them being the world’s third highest peak, Mt. Kanchenjunga. On some of the surrounding mountain tops stand huge religious statues overlooking the city. These are the most important tourist attractions around here.

As far as we know, the city doesn’t have any public transportation, meaning that one must walk (or skate) or to hire a taxi to get around. While we were in Namchi, they were just building a cable car from the city to one of the tops with the statue, but it wasn’t finished yet.

The absolute highlight of our stay in Namchi was our accommodation, Bumtar Villa. When we arrived, we were first greeted by a pack of dogs. The family has altogether nine dogs and they all were friendly and cute. The family’s son is a vet student who had saved all these dogs and brought them home, and luckily his parents agreed to let them all live with the family. This already tells a lot about how lovely our hosts were.

We lived in the family’s huge wooden house but had our own room with a private bathroom. The house was surrounded by a beautiful garden with fruit trees and some small green houses. The weather was warmer than in Gangtok and our days there were sunny, but still it wasn’t the fruit season yet. Except for guavas, which were delicious.

Inside the house it was cold, like apparently in every house in Northern India. But every evening our host Tamang lit a fire in the fireplace for us, which was lovely.

Every morning there was a breakfast waiting for us when we woke up. Also, the meals prepared by the family were delicious. On New Year’s Eve the family prepared us lovely snacks and we got to taste some delicious homemade drinks.

The giant Shiva and the Char Dhams

We started the last year of the decade by visiting Char Dham, a huge pilgrimage site on top of a mountain. We walked the whole way up and down from Namchi and it was a nice hike, partly following the road, partly going on some long stairs through the nature. On the way we could also admire some great views to the Kanchenjunga and other surrounding peaks.

The centerpiece of the place is a giant Shiva Statue, sitting on top of the main temple of the site. It’s surrounded by numerous smaller temples and most importantly, the replicas of the four Char Dhams that are scattered around India. Char Dham means “Four abodes” and in Hinduism it’s believed that visiting all of them helps one to achieve Moksha, or salvation of the re-birth cycle. In the temples we got so many blessings that the new year (or decade) must be a good one.

Many Indian tourists had also arrived at the site to get some good luck for the next year. For some of them we seemed to be as big of an attraction as the statues and temples. Therefore, we got into conversations and posed in pictures a lot.

On our way to the Char Dham we saw a party venue where there was going to be a big New Year’s party in the evening. We considered about going there but as it was far from our place and as we are clearly getting old, we decided to skip it. Good so, because we had the coziest evening and the most delicious food and drinks at the Bumtar Villa.

We started the evening just the two of us and our host Tamang by the fireplace. Tamang and his wife had prepared us different delicious local snacks. To go with the snacks, we got to taste homemade guava and rhododendron wines. We had never drunk something like that before, but both wines were really yummy. We also had bought a bottle of red wine that was produced in Sikkim.

Later in the evening a couple from Kolkata arrived at the homestay and joined us by the fire. Even though we didn’t always agree on everything, we had interesting conversations with each other.

Tamang has promised us a dinner free of charge to celebrate the New Year (so nice of him!). We assumed, that the snacks were the dinner because cooking them must have been a lot of work and there were plenty. But at some point of the evening we were told to sit at the table and a big dinner was served. We were already full of the snacks but tried to eat as much as we could. If this is an omen for the next decade, we will have lots of delicious food and get really fat.

In North-India people go to sleep early and we have also adapted this lifestyle. Therefore, it was difficult for us to stay up until midnight (lol). We made it, anyhow, and went all out together to look at the fireworks. We heard that fireworks are nowadays mostly banned in India, but we could still see some down in the valley. Bumtar Villa’s garden, located on a slope of a hill, was the perfect place to watch the firework show and to welcome the new decade.

Because of going into bed early, we woke up to the first day of 2020 feeling fresh and decided to visit the other mountain top with a statue, Samdruptse. According to some sources, this is the world’s tallest statue. This, anyhow, is not true – instead it is the world’s tallest statue of Guru Rinpoche, who is the patron saint of Sikkim. The name of Samdruptse means “Wish Fulfilling Mountain”, so a perfect place to visit on the first stay of the year. While turning the giant prayer wheels at the site we made good wishes for the new year. The hill is also believed to be a dormant volcano and only good prayers can keep it from not erupting. So of course, we wished for that, too. The golden statue itself was impressive, even though it was just under renovation. And the views from the top were naturally amazing.

As we had walked the whole way to the top yesterday, we decided to hire a taxi this time. The taxi driver agreed to have a stop with us at the Rock Garden on the way back down. The Rock Garden is located on a mountain slope, so walking around there meant going down a lot and the same way back up. At this time of the year there were not many plants to see and the whole place seemed quite abandoned, but the views were even better than from Samdruptse. We also could see the ropeway. This time even Seri didn’t have the urge to ride with it though, as it is quite expensive considering that you can’t basically get anywhere with it, because the part that leads to the city is not finished yet.

Tongba by the fireplace – our last evening in Namchi

One of the things we wanted to do in Sikkim was to drink Tongba. Tamang promised to help us out with that and on our last evening he had prepared us two huge mugs of Tongba.

Tongba, also known as Chang, is a traditional drink made from fermented millet. You put the millet to the mug, pour hot water over it, let it rest for a while and then drink it with a bamboo straw. When the mug is empty, you can fill it again. Every time the alcohol content grows higher and you can also make it stronger by letting it rest longer. While enjoying our Tongbas, Tamang explained us how it’s made. If we ever managed to make it at home, we are sure this endless alcohol beverage would be a big hit among our friends. After Tamang had filled our cups three times and we were already relatively tipsy, we told him it was enough. We had to get up early the next morning.

Before leaving Sikkim and continuing our way towards East, we wanted to see one more place in the state. We had many options but ended up choosing Pelling in West-Sikkim. Tamang was kind enough to wake up early and to give us a lift to the shared taxi stand at seven in the morning. We hopped on a sumo and were on our way towards new adventures….

7 thoughts on “Namchi – Sacred mountains, countless blessings and exotic drinks for the start of new decade”