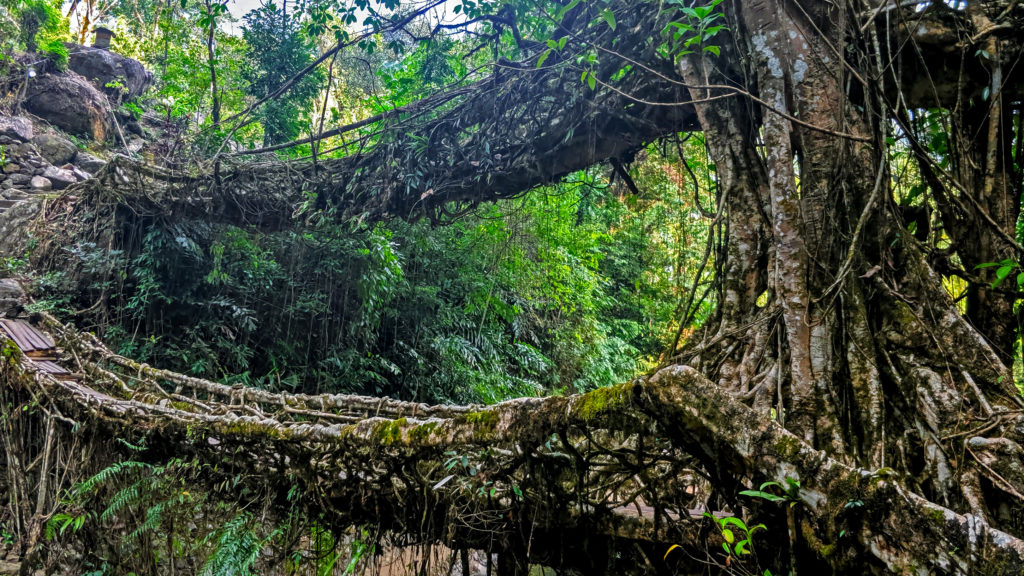 Our trek in the jungles of Meghalaya was exactly that kind of an adventure that we had had in our minds when we dreamt of this journey back home. Mysterious living root bridges, waterfalls, turquoise pools deep in the forest… We enjoyed every bit of our trip from Sohra to the root bridges, but the best part of it was staying among the indigenous Khasi people in a tiny jungle village.

The living root bridges of Meghalaya

The whole North-East Indian state Meghalaya is still pretty much “off the beaten path” but the living root bridges are the top attraction of the area. These bridges, hidden in the lush jungles, are a great example of bioengineering. Even though the living root bridges of Meghalaya have started to attract more and more adventurous tourists, they still serve an important purpose for the people living in the jungle.

Forming bridges out of the aerial roots of the rubber fig tree is an old tradition of the Khasi people, the biggest indigenous group of Meghalaya. Meghalaya is the wettest place on Earth, getting the average of 12000 mm rainfall annually. A normal wooden bridge, for example, wouldn’t last long in these extreme weather conditions and therefore the locals have started to use the roots of living trees instead. The living root bridges can last hundreds of years. As the tree gets older, its roots thicken, so the bridge grows stronger over the years.

Some of the bridges are formed solely of the roots of the Rubber Fig Tree by guiding the roots to grow to desired direction. In some bridges other materials, like bamboo and iron, have also been used to make the bridge more stable. We saw many different variations of the root bridges and even the famous two-storey one. We are amazed of the beauty of these bridges and the creativity of the locals that have created these wonders.

Starting our adventure from Sohra

We started our way towards the living root bridges from Sohra (also known as Cherrapunj). Accompanied by Sonauli, an Indian girl we got to know at our hostel, we took a bus to a nearby village called Tyrna. It’s a white-and-blue colored bus that stops at Tyrna’s central crossing around 9 in the morning.

From Tyrna to Nongriat – Not the only tourists on the path

From Tyrna we started our hike into the jungle. Our first goal was to get to the village of Nongriat. Nongriat is the place where most of the people who come to see the bridges stay overnight (unless they do only a day trip). We were not sure if we would stay there, but we took it as our first destination, because we assumed it would be easy to find. There is no road leading to the village, instead one needs to walk some hours through the lush jungle in order to reach it. It’s steep downhill, but the whole path until Nongriat is mostly paved and hard to miss.

It was wonderful to walk in the jungle, but to be honest, the way until Nongriat was not as we had imagined it. It was far from some adventurous alone in the jungle experience. We met plenty of other people on the path. Mostly Indian day trippers with a guide. There was also a loud group of teenagers with a boombox and we even saw a girl walking in the jungle on high heels.

On the way to Nongriat we saw our first root bridge, the longest one in the area. On the same day we also visited the most famous one, the “double-decker” bridge, located right after Nongriat. It was quite crowded there, so we decided to return the next day.

Nongriat – the tourist centre of the jungle

Nongriat is a charming little village amidst the wonderful green nature. A few years ago, there were only two guest houses in the village, but now that the tourism had started to boom even in this remote spot that you can only reach on foot, it seemed that many houses had turned into small and basic guesthouses.

Even though Nongriat surely would have also been a good place to stay, we decided to continue deeper into the jungle to find our own piece of paradise. We had gotten a suggestion to stay in Mynteng, a small village some half an hour away from Nongriat. Sonauli didn’t want to walk any further, so she stayed in Nongriat but we planned to meet the next day again.

The last thirty minutes of our walk that day were the most exciting ones. All of a sudden, we were alone in the jungle. We started wondering, what kind of snakes and spiders are living in this forest and listening more carefully to the sounds from the surrounding bushes. We were also not completely sure if we were on the right path, but luckily, just before sunset, we arrived to the village.

There was a sign leading to the one and only guesthouse of the village. When we arrived there was no-one, but some children guided us to the home of a woman named Veronica, who was in charge of the place.

Life in the jungle village

It felt like we had found the paradise, a small jungle village with 63 people and 17 families. There are no shops or restaurants, and just one simple guesthouse with two wooden “cabins”. SHG Homestay is run by a local women’s collective.

It was lovely to sleep and to wake up in the jungle. Initially we had planned to spend only one night there, but while having breakfast, just before leaving, we decided that we wanted to stay for another night after all.

Veronica took good care of us. She provided us porridge for breakfast and noodles for lunch. The highlight were the dinners, which she cooked in the kitchen cottage next to the guesthouse, together with her cousin, who was also part of the women’s collective. We got to taste some specialities of the Khasi cuisine and flavors of the jungle, like salad made of banana flower.

Veronica was a warm-hearted, friendly and strong (but small) woman. We really enjoyed the talks with her and learning more about Khasi culture and their language.

Trek to the Rainbow falls

The whole area around Nongriat offers great opportunities for small day treks. The most popular one is the trek to the Rainbow Falls. It took around two hours to reach the falls from Mynteng. First, we had to go back to Nongriat and pass the double-decker root bridge. Now we were the only people there – from 2020 on, all the attractions of the area are officially closed on Sundays.

From there the path is leading across some rivers via another root bridge and a suspension bridge made of iron. Finally, the path starts to follow the river with several turquoise pools on the way, until it reaches the waterfall. The last part, in order to reach the pool where the waterfall flows into, is a steep climb down, party equipped with some bamboo ladders.

When we arrived, there were also a few other tourists hanging out on the rocks. Naturally, there’s not much phone signal in the jungle, so we couldn’t contact Sonauli as planned, but she also turned up at the waterfall later.

As it was dry season, the river was very low and calm, and Seri could swim in the bright turquoise, cold water. In the rain season its probably not possible, and we heard a tragic story of a female traveler getting sucked into the river and drowning a few years ago – so take care!

Chewing paan (areca nuts [the fruits of betel palm] wrapped in a betel leaf) is widely popular in North-East India and growing it is an important source of income in this area. You see (slightly creepy looking) red smiles everywhere, as well as red stains on the ground, that luckily is not blood, but the spit colored by paan. Just before leaving, Veronica gave us both small pieces of the nut, wrapped in the betel leaf. Paan is a stimulant that should make one feel good.

Veronica told us some other, shorter way directly back to Tyrna, so that we didn’t have to walk back to Nongriat. This path is used by the locals in order to get to the market in Sohra once a week. For them it takes about 45 minutes to get to Tyrna, for us it took almost 2 hours.

On the way we did a little detour to see one more beautiful root bridge – a hidden gem deep in the jungle. This one consisted solely of roots, it was a bit bouncier and more unsteady, and therefore our favorite one of all the root bridges we saw.

On the way towards Tyrna we also crossed a very long suspension bridge made of iron. It reminded us of the bridge in Passu, even though this one was not as rickety as the ones in Pakistan, so crossing wasn’t a problem even for Johanna. The rest of the way was steep uphill with hundreds of stairs made of stones.

From Tyrna to Shillong

In Tyrna we catched a Sumo to Sohra for 50 rupees (0,6 €). Luckily, Monday is the market day so we got a sumo ride easily. Squeezed in the back seat we soon learned that where elsewhere in India 10 people fit into one sumo, here 17 small Khasis in one sumo were not a problem.

In Sohra we picked up our bigger backpacks from the hostel. It was bit of a hassle to get a sumo from Sohra to Shillong. In the end we got a free ride to the market where we had to change to a small car that took us to Shillong (100 rupees per person with 4 people on the backseat). After spending a few days in the jungles and small villages of Meghalaya, it was time to get to know the state’s capital, Shillong. 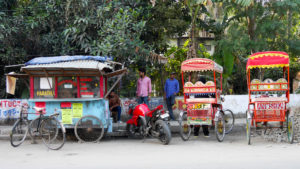 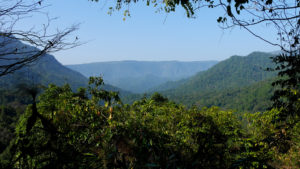 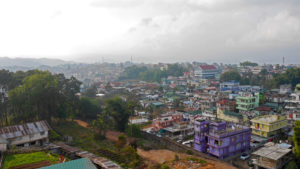