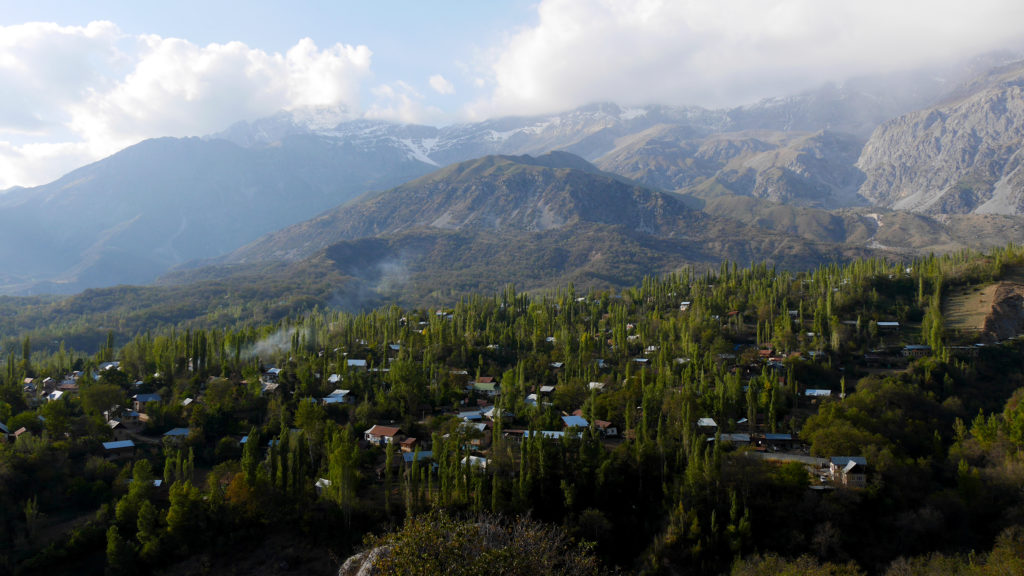 The village of Arslanbop in Kyrgyzstan lies 180 kilometers from Osh, so it made a good stop for us on the way from Bishkek to Osh. The mountain village itself is small, but it’s known for its walnut forest which is the biggest one in the world. Our timing for visiting Arslanbop couldn’t have been better, as it is the harvest time now.

Staying in a local home

We had contacted the local Community Based Tourism Office (CBT) to arrange a homestay for us. The concept of CBT is to improve living conditions of people in rural areas by a sustainable and wholesome ecotourism model that utilizes local natural and recreational resources. So in Arslanbop almost all the accommodation is organized in homestays by the local CBT office. Our homestay had a charming porch with a comfy seating area and plenty of flowers and other plants.

The family cooked delicious vegetarian food for us, so we got to taste local, usually meaty specialties, like plov (fried rice dish) and manty (dumplings). We enjoyed our dinners and breakfasts in a nice company – with Lea and Kay from Germany, who stayed in the other guest room.

On our first morning we went, surprise surprise, to the bazaar. This one was rather small. Besides the fruit and clothes stands, we payed attention to the people. The style of the people here is a bit different than to what we have used to elsewhere in Kyrgyzstan, as the majority of residents are of Uzbek ethnic. The men’s traditional hat is smaller than the one of the Kyrgyz men and almost every woman is wearing a scarf on the head.

After the bazaar we went for a walk to the walnut forest, of course! We have gotten a recommendation from the CBT office to do a loop, visiting a waterfall on the same way. So, we first had a stop at what the locals call the Small Waterfall.

In the soviet time the walnut forest belonged to everyone. So, anyone could freely go there, collect nuts and sell them. But nowadays it’s split to small patches, each one being private, rented to local families. Therefore, we were only allowed to walk on the small pathways between the patches. Some of the families are, at least partly, moving to the forest for the harvest season and putting up tents on their patches. We got to watch the locals collecting nuts and herding their animals in the forest. It was a fascinating thing to see and the forest itself was beautiful.

On our way back we stumbled upon Lea and Kay in the forest. They were just about to go on a tour at the village’s own walnut oil factory. We decided to join them. It was interesting to learn a little bit about the village’s history and the communal work there. We also learned things about making oil, like what’s the actual difference between normal and cold pressed oil. The cold oil press was donated to the owner by a German NGO to give the possibility to produce locally high-quality walnut oil. He was getting it under the condition that people can press small amounts up to 9 Kilogram in the first 5 years for free.

We had originally planned to stay a second day in Arslanbop. After a successful day of sightseeing we anyhow decided that we were already ready to leave the next morning.

Ps: The CBT in Arslanbop is always looking for volunteers. If you would like to spend some weeks in a nice Kyrgyz village and work for free accommodation, you can contact the very helpful and friendly coordinator Mr. Hayat Tarikov: cbtarslanbob@gmail.com 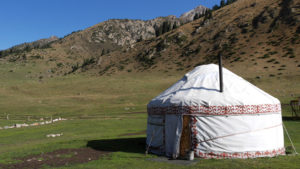 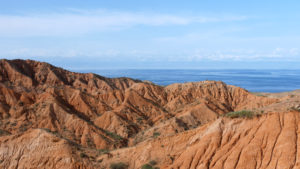 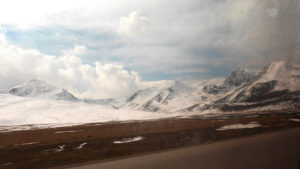 Ride from Bishkek to Arslanbop – Too good to be true