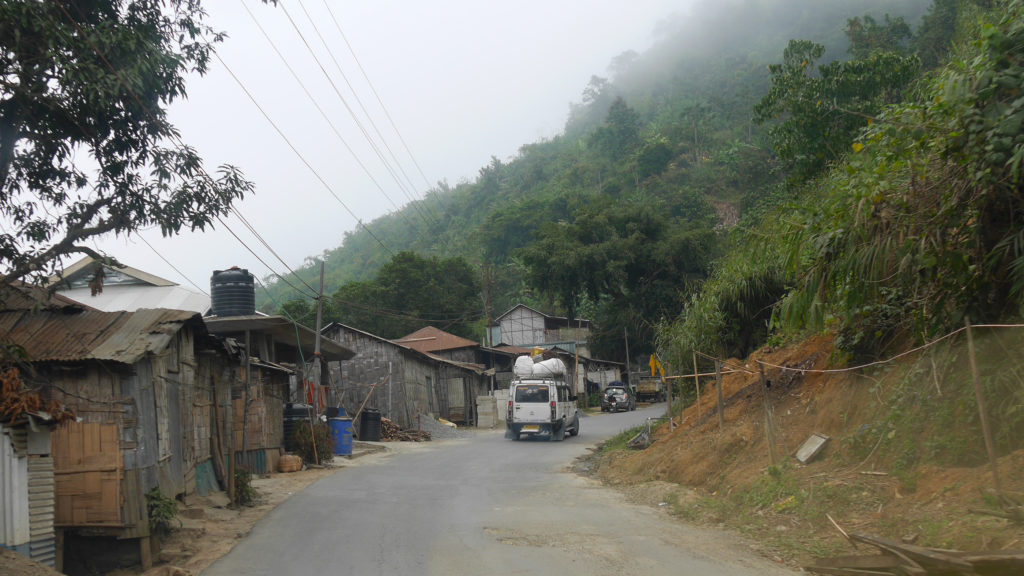 From Aizawl, the capital of the North-East Indian state of Mizoram, we headed to Champhai in the same state. Champhai was our last destination in India, as it is the last bigger town before the border to Myanmar. We crossed the border through the Zokhawthar-Rihkhawdar border post, which opened up for foreigners just recently and therefore we couldn’t find almost any information about it beforehand. Getting from the wild, wild East of India to the wild, wild West of Myanmar was quite an adventure.

From Aizawl to Champhai

Like we wrote in our previous post, there were some problems with our Sumo reservation, but we still managed to start our journey towards Champhai already before 7 am. The journey took around ten hours with a few breaks and one construction site where we had to wait. The time passed relatively fast as we sat on the front seat of the Sumo and could admire the misty views along the way. The road was mostly in an okay condition.

Most people of Mizoram (and of the area on the other side of the border) are strict Christians, which means that on Sunday everything is closed. Also, the border is closed on Sundays and no transport is operating on that day either, so in order to be able to cross the border straight on Monday, we had to arrive in Champhai on Saturday.

We stayed in Hotel Chawngthu which was one of the few options to stay in Champhai over the weekend. Even the hotel was closed on Sundays (we could use the side door to get in and out), so Sunday would really not be a good day to arrive into the town.

When we arrived on Saturday, the places were just closing so we couldn’t even find an open restaurant in Champhai, apart from our the one in our hotel. On Sunday we got a meal served into our room. Our first traditional Mizo meal was some green leaves in a tasteless soup and a very watery daal, so we didn’t mind that it was also our last Mizo meal.

We really didn’t see much in the town but did some walking on the empty streets. The town felt cosy and the area was beautiful, which we could see well from the rooftop of our hotel. Even though Mizoram is practically a dry state, it’s allowed to cultivate grapes for wine in the Champhai region. We would have loved to visit the vineyard in Champhai, but of course, it was closed, too.

From Champhai to Zokhawthar – Potholes and farts

We started our journey towards the border right after the sunrise. Our last sunrise in India was beaaautiful.

We didn’t really know where to find a sumo from Champhai towards the border, but luckily the town is small and we found the place easily. First the guys at the sumo stop told us that the first sumo was already full and that we would need to wait until the next one is leaving. All of a sudden, they decided, though, that we could also get in, so that we were 12 people instead of 10 in the car. The ride costed 300 rupees per person (Jan 2020).

In the sumo we sat next to a nice dude. Despite the fact that we couldn’t understand each other very well because of the language barrier, he talked with us, offered us some paan and invited us to stay at his place. Seri took the paan offer but, unfortunately, we had to turn the other offer down, as we were just headed to Myanmar. The men changed numbers anyhow, who knows if we happen to be around another time. Johanna didn’t take too much part in the conversation, but kept her head half out of the window – partly because of the smelly farts of this nice dude (he told that the paan makes his digestion work), partly in order not to get sick on the bumpy road. The winding dirt road leading from Champhai to Zokhawthar was in a poor condition with a lot of potholes.

On the way we had one stop that combined praying and peeing. It’s pretty common in this area to stop the car at certain times, when one passenger in the car, like out of a common agreement, starts to lead the prayer. After that there’s time to go to the bush if you have to.

From Zokhawthar Town to the border by motorbike taxi

Like said, we didn’t have much idea about this border crossing before we did it ourselves. It came as a surprise that the sumo didn’t take us all the way to the border but to the town called Zokhawthar. There we had to find a transportation to the border, which in this case were two motorbike taxis (100 rupees per head). The dirt road was in such bad condition that even our drivers laughed about it, but luckily these young guys seemed to be skilled with the motorbikes so we were not too terrified to sit on the back.

Zokhawthar – at the Indian side of the border

The border post on the Indian side was a tiny building right next to a bridge. Across the bridge, on the other side of the river, is Myanmar.

Seems that it was completely useless to do the registration in Aizawl. Like we had already guessed, no-one at the border checked if we had done it. In fact, they didn’t even have computers to check or fill our information, only some book where everything was hand-written. We filled our info ourselves, probably could have written anything there… Before we got the exit stamps, we were asked to present the print-out of our Myanmar e-visas.

There was some drunken man hanging out inside the border building, who fell on Johanna’s backpack that was on the floor. Also, during our migration process, a small manifestation had started at the border. People were protesting something but we didn’t understand what. The friendly border guard guided us through the crowd and across the bridge. He was even carrying Johanna’s backpack!

Rihkhawdar – at the Myanmar side of the border

We were welcomed to Myanmar by another bunch of friendly border guards. They pointed us to the immigration office on the left side. There a nice young man went through our documents and filled our information – this time on a computer.

Before we could leave the border town, we had to get local money, kyats. As there is no ATM in Rihkhawdar we had kept some Indian currency to exchange. No-one on the street spoke English, but by asking around “rupeeeeee, kyaaaaat”, we found help. A skinny, drunken man with a motorbike helmet on took us to some woman’s kitchen. This business woman with a baby hanging on her belly gave us kyats on a really bad exchange rate, but now we had enough money until our next destination.

How to get from Rihkhawdhar to Tedim

We hadn’t been able to find any information about transport from the border towards the next “bigger” town, Tedim. So, we had basically no idea how to continue from here. We asked the border worker if he knew how to get to Tedim. He didn’t either, but after making some phone calls he told us that a bus would leave around four. This meant we would need to wait over five hours, but we were happy to know that we could get forward on the same day. Just when we were about to leave, his phone rang and someone told him that there’s a truck leaving to Teddim’s direction right now.

Our transportation from Rikhawthar on was a big pick-up truck with wooden planks as seats in the back. There we found a man who could speak English and he explained to us that there were no regular buses going because it was Monday.

So, without knowing much beforehand, we had made it over the border and were finally on our way towards Tedim and deeper into the state of Chin. The hilly and beautiful Chin is one of the least developed and least traveled states in Myanmar, which wasn’t necessarily the easiest place to start our adventures in a whole new country and culture, as we soon learned…