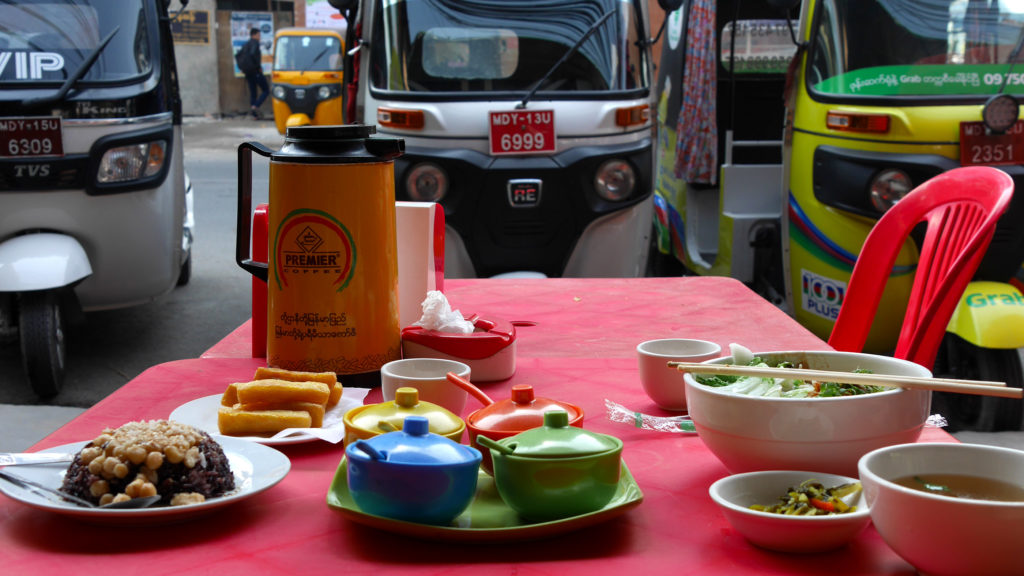 Some travelers want to escape the big South-East Asian metropoles as soon as they can, but we always feel at home in them. Oh, how we had already missed the busy markets and the little plastic chairs in front of street restaurants. Despite being busy and somewhat chaotic, we really enjoyed being in Mandalay.

A long night from Kalay to Mandalay

We traveled from Kalay to Mandalay by an overnight minibus. The night was relatively exhausting.

Even though the roads were in much better condition than what we had experienced on our first kilometers in Myanmar, the first part of the journey, until Monywa, felt like a rollercoaster. Not a wonder that it didn’t take long until the first passengers started puking up. Another clear sign of being finally in South-East Asia, when the passengers are given a puke bag and a bottle of water when boarding a bus. When the bag gets full, people casually hang it to the holder on the back of the seat in front.

It wasn’t only the curvy road and the gagging sounds of the fellow passengers that kept us awake. Also, we were stopping all the time. Twice we were told to change our seats in the middle of the night and one time we even had to change the minibus, even though we had booked a direct ticket to Mandalay.

When we finally arrived to Mandalay around 5.30 am, we felt quite fucked up. We were so happy, that we had, for once, booked a bit fancier accommodation with a comfy room and even a pool. The room costed 27 euros per night, but it totally paid off. They let us check in straight away even though the check-in time would have been at 2 pm and they even let us have a free breakfast that morning.

Since we were, for the first time in a long time, in a big city and going to stay there for a couple of days, it was time to check on Seri’s health problems. He had had some kind of strange pain in the lower stomach on and off for weeks already. Johanna, as a talented google-doctor, had already diagnosed him with different kinds of bladder and prostate deceases and prescribed him a strong Indian antibiotic, which, surprisingly, didn’t help.

The staff of the Mandalay City Hospital were mostly English speaking and very helpful at least. After describing the problems, the nurse measured Seri’s weight, height and blood pressure, which to us didn’t seem very relevant, but ok why not.

There were some language barrier problems while we talked to the doctor’s assistant. After inspecting the ultra-sound picture, the man told that Seri has an 8 to 11 centimeters sized kidney stone! Yikes, that’s huge!!

While waiting to meet the doctor, we were in shock. We almost started to cry while discussing if our only option is to fly home to get Seri to a surgery.

Finally, when we got to meet the doctor, he told us, by inspecting the very same ultra sound picture, that the kidney stone is, in fact, about 5mm of size and totally harmless. 11 centimeters would be the size of the whole kidney, lol. The doctor stated that the kidney stone had nothing to do with Seri’s pain, that he’s having a urinary tract infection and that he should continue with the antibiotics prescribed by Dr. Johanna.

SPOILER ALERT: The antibiotic didn’t help, the pain stayed on and off until we got home in March. It turned out to be a hernia that had to be operated – luckily it didn’t get worse than that while we were on the road!

There would be a combined one-week ticket for visiting many attractions in Mandalay, and sure there would be plenty of interesting things to see in the city. But since we didn’t want to start rushing from one attraction to another, we decided not to buy it and instead to concentrate to attractions that are free of charge.

We climbed up to the Mandalay Hill, which is supposed to be a great place to watch the sunset. The way up was really nice, the stairs led through several Buddhist shrines and the views were good.

In order to get to the top of the temple on the hill, one has to take either elevator or escalators. It was heartwarming/hilarious to watch a group of local tourists being totally thrilled, since they had, as it seemed, never stood on an escalator before.

So far, we had seen only a very few tourists in Mandalay (and in the last weeks), but the top was completely packed – not quite the peaceful sunset spot we had hoped for.

On the way to the hill we visited the nearby Sandamuni Pagoda. Surrounding the golden main pagoda were countless beautiful, white stupas. This place was gorgeous, and completely free to visit.

A bit more special program that we did in Mandalay was to visit the Myanmar Marionette Theater. This show was a great introduction to traditional Burmese arts, that consisted of music, dance and the main focus of the show, puppetry.

The puppets were all kinds of figures from animals to alchemists and devils, dancing to traditional live music, telling stories from the history and folklore. Mostly the puppeteers were hidden behind a curtain, but sometimes the curtain would open and we could admire how the masters used their hands to make the puppets move.

At the end of the show we could try it ourselves, and it was totally not easy. The ticket costed 15000 MMK (10€) per person, and in our opinion it was worth it.

Somehow, we had heard that the Burmese food is not really “special”, and especially if you are a vegetarian, you will have a hard time in Myanmar. Even though we had also had our difficulties with veggie food, at first, latest in Mandalay this presumption proved to be complete nonsense. As most of the time when we travel, also in Mandalay our favorite activity was to snack around, tasting all kinds of new, exciting flavors.

We finally found the word we had been looking for the last days. If you want vegetarian food in Myanmar, say: Ta Ta Ló, and you will most probably get it (at least in the areas where Burmese is spoken).

Mogok Daw Shan was a basic street food restaurant, just the way we like them. They had an English menu, which made our life easier trying to find vegetarian food. Here we tried Shan Noodles for the first time, a super delicious noodle bowl coming from the Shan State of Myanmar. We had other stuff too, like dumplings and fried chickpea tofu (another yummy Burmese veggie-speciality).

Marie Min was the only fully vegetarian restaurant in Mandalay that we tried, and this one we can really recommend.

One of the nicest culinary surprises we found on a little side street. The big streets of Mandalay are really busy and not very pedestrian friendly. Stepping to the smaller side streets can sometimes be like venturing to a whole new world, or to some smaller village. All of a sudden, it’s peaceful and the locals greet you almost like they had never seen a tourist before. During one of our side-street ventures we stumbled upon a little crepe stand. The vegan crepes made out of coconut milk and rice flour, topped with herbs, chili and chickpeas were amazing.

We also did some culinary discoveries while visiting Mandalay’s markets. Even though we don’t usually like shopping that much, visiting a market gives a good glimpse to the local culture, plus you often find delicious, cheap snacks there.

The first one that we visited was the Chinatown Night Market. It was a good place for buying delicious fruits and veggies. There we had our second go on Shan Noodles and chickpea tofu. Still liking them very much. Feeling a bit paranoid hanging out at a Chinese market, though, with Corona news just breaking the headlines.

Zay Cho Market was a huge market hall, mostly full of some crap from China. But one could also find some gorgeous traditional longyi fabrics here. Even though we already bought a few in Kalay, Johanna ended up buying one more from here.

Outside of this marketplace we found vendors selling all kinds of snacks, and among them we found our new favorite Burmese sweets. Apparently, it’s called Shwegyi Sanwei Makin. It’s a cake made out of semolina and it’s super delicious, we had to buy more straight away.

The actual reason we originally went to Zay Cho Market was to get some kind of a huge bag, where we could pack most of our stuff. This bag would be shipped to Yangon by bus, while we would ride there on a motorbike, having the adventure of a lifetime on the way…

Originally, we were planning to leave Mandalay earlier and to continue from there to Bagan on a motorbike. Because of some schedule confusions with the motorbike so we changed the plan a bit. Therefore, we did a two-night trip from Mandalay to the magical Bagan by bus and returned back to Mandalay, in order to get our bike.

The next ten days we would have the adventure of a lifetime, riding from Mandalay to Yangon on a Royal Enfield. Stay tuned for stories about curvy mountain roads, amazing views, tons of roadside pagodas, endless construction sites, flat tires, minor accidents and some of the highlights of Myanmar, including the Lake Inle and visiting local tribes…

PrevPreviousBagan – Age old pagodas and hunting for sunrise
NextMyanmar on a motorbike, part 1: From Mandalay to YwanganNext 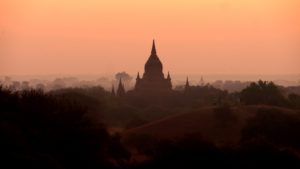