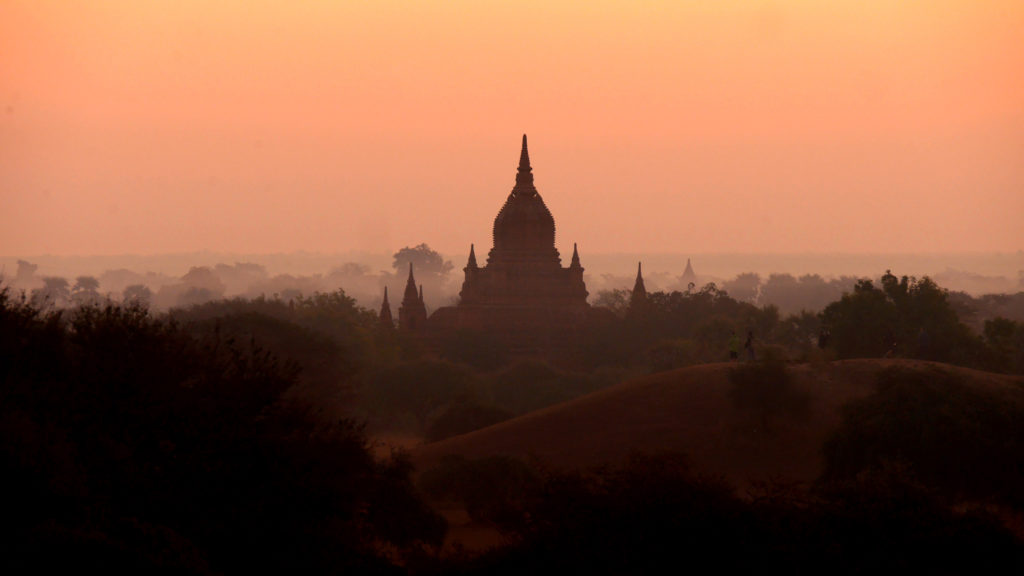 The ancient city of Bagan is one of Myanmar’s most important tourist attractions – and no wonder why. Even having some doubts at first, we, too, decided to visit there while in Myanmar. Even though our thoughts about the place are still slightly controversial, Bagan was worth visiting. We had great time riding around there with an e-scooter, exploring the impressive ancient pagodas. And, of course, we also saw the famous Bagan sunrise.

From Mandalay to Bagan

From Kalay we traveled to Mandalay. We did this trip to Bagan from Mandalay, returning back there afterwards. Therefore, we will first tell you about Bagan, and our next post will be about our days in Mandalay.

The easiest and fastest way to get from Mandalay to Bagan was to book a bus through our hotel. We were recommended to go with the OK Express (9000MMK / 5,7 euros one way). With picking up people from their hotels in Mandalay and having a few stops on the way, we arrived to Bagan after about five hours.

While some years back the bus companies were still transferring customers directly to their accommodation in Bagan, they are not allowed to do so anymore. Rumor has it that it’s because of Bagan’s greedy tuk tuk mafia, which also greeted us with their ridiculous prices straight when we got out of our bus. We didn’t want to support these corrupt businesses, so we decided to walk as our guesthouse was only 2 km away. On the way we entered the archeological zone of Bagan…

In order to enter the archeological zone of Bagan (where all the temples and most of the guesthouses, restaurants etc. are located), one has to buy a ticket. The ticket costs 25000MMK (15,5 euros) and is valid for five days.

Our guesthouse Ever New was a nice and very affordable place to stay. After having a small rest, we rented an e-scooter from our guesthouse and started exploring Bagan.

Motorbikes are forbidden in the whole archeological zone, but e-scooters are available for rent at many guesthouses. We paid 13000MMK / 8 euros for one and a half days’ rent. At first, riding an e-scooter felt a bit weird as it’s so silent compared to normal scooter or motorbike. But with a maximum speed of 45 km/h and a charge lasting almost a day it was a great way to explore, as the temples are scattered around a huge area.

The ancient temples and pagodas of Bagan

Bagan was the capital of the Pagan Kingdom between the 11th and the 13th century. Originally there were some 4500 Buddhist temples and pagodas, of which over 3800 remain to this day.

Some of the main pagodas were visited by many tourists and surrounded by small souvenir shops. But because the area is so vast, it was easy to find more remote, peaceful pagodas and sometimes we could explore them completely on our own. For this purpose, the e-scooter was really practical. We just cruised around and stopped whenever we saw something interesting. We saw pagodas of all shapes and sizes, reddish brown, golden and white. Some of them were reeeally impressive!

Because of security reasons and to conserve the ancient buildings, many of the pagodas are nowadays completely closed from visitors. Also, you are officially not allowed to climb the stairs up to the top of the pagodas anymore…

Where to watch the Bagan sunrise and sunset

So, as you are not allowed to get on top of the pagodas anymore, you can say goodbyes to your dreams of taking those iconic sunrise pictures from the top of a pagoda (unless you’re really sneaky). But the whole internet is full of them, anyway, so don’t worry.  Despite this little set-back, we managed to find some good places for watching the sun go up and down.

For watching the sun and the dozens of rich tourists’ hot air balloons rise over the ancient pagodas, we got up when it was still dark and cold. Then we headed to a place that can be found on Google Maps as Sulamuni Manmade Sunset Hill. We were not the only ones there, but it was pretty peaceful. The views were surely not as good as from top of one of the pagodas, but still good. The sunrise was really beautiful.

The Bagan sunset will stay in our memories as something more special, though. We had gotten a tip from a Dutch couple we met at a restaurant for a place to watch the sunset. They told us they’ve been there before and that there is a monk staying in the pagoda who lets you to go up. This pagoda was located far from the most visited ones and driving there was an adventure on its own. When we finally found the right pagoda, we saw the same couple sitting on top of it. The monk did let us get up as well and so we admired the beautiful views and the colors of sunset together. We totally understand why getting up to the pagodas was banned, though, and therefore we will keep the location of this one as a secret. But if you ask around, maybe you will find your own secret sunset pagoda, too.

The Bagan archeological area contains both, the “Old Bagan” and the “New Bagan”. These are both areas where you can find some shops, restaurants and guesthouses. One of the perks of being in a more touristy place for us is the ease of finding vegetarian food! We tried three different vegetarian restaurants in Bagan. Yar Pyi in Old Bagan was a perfect place to have a delicious, cheap and local lunch. They had many veggie options.

The Moon in New Bagan was a bit more upscale restaurant with an atmospheric garden and fully vegetarian menu. On the same street, more close to the main road, we also found a vegetarian restaurant which name we can’t remember and which is not marked on Google maps. Both, the food and the service there were excellent.

Bagan – To visit or not to visit?

When some place is really hyped, we tend to get sceptic. Is the place really worth visiting, is it totally overcrowded and will we make it worse by going there? Also, especially in a country like Myanmar, we were considering whether it is ethical to visit a place like this or not.

From our point of view, Bagan didn’t seem like the huge tourist trap we were expecting it to be. The tourism in Myanmar is all in all much less developed than in many other South-East Asian countries, so even in the country’s most touristy places, you will find the authentic feeling, and in an area that vast, it was easy to escape the crowds. While in Bagan, we had the feeling that the tourism hasn’t gotten completely out of hands, and that the locals could live their normal lives side by side with the tourists.

But what we experienced wasn’t the whole truth, though. Just after visiting Bagan, we learned, that in the early 90’s, many locals had been forced to move from Old Bagan to the area that is nowadays known as the New Bagan. That time the area didn’t have anything – no buildings, no roads, water or electricity, and the people didn’t get any compensation for having to move and to start their lives over, either. The people were forced to move in order to make the area more tourist-friendly and to get recognized as an UNESCO World Heritage Site (which, in the end, didn’t happen before 2019).

Bagan was a magical place to see and we are happy we didn’t miss it. When visiting Bagan, you can’t avoid paying the entrance fee which is, unfortunately, mostly going to the government, with only a minimal part used for conservation of the site. But apart from that, and especially when visiting a place like this, it is really important to respect the surroundings and to support the local small businesses. This way the tourism could actually do more good than harm.

2 thoughts on “Bagan – Age old pagodas and hunting for sunrise”