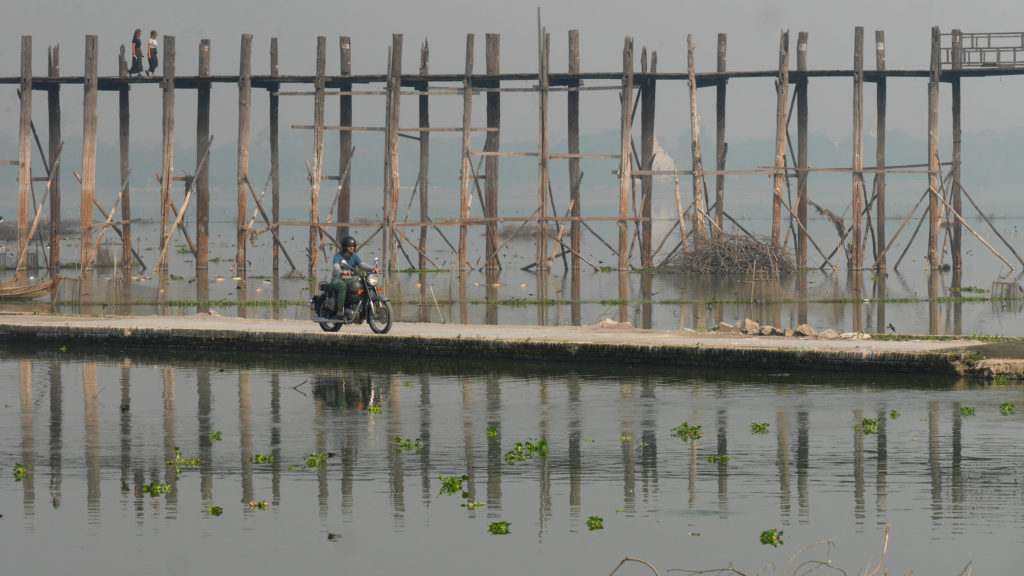 It’s time to start our amazing adventure in Myanmar, a roadtrip on a motorbike from Mandalay to Yangon. For the next 10 days, we would be on the road, visiting some of the most fascinating places of the country on the way. First, we were headed to East, in the direction of the Lake Inle. On our first day, we made it through the curvy roads to the karst mountains, coffee plantations and the village of Ywangan, some 130 kilometers away from Mandalay. On the way, we had a stop at the famous U Bein Bridge.

A few weeks back, Mika, a Finnish guy who runs a travel agency and a motorbike rental company in Myanmar, sent us a message. He had read our blog and liked what we are doing. We kept writing with him and finally ended up doing a collaboration. We are always up for road trips, and Mika’s company, Discovery Rides, turned out anyway to be a perfect pick for us.

Discovery Rides is the only motorbike rental company in Myanmar with the possibility of different pick-up and drop-off points. This meant that we could pick the bike up in Mandalay and drop it off in Yangon, which was very convenient, so we didn’t have to return to our starting point on our way towards Thailand. As we picked up our bike at the Mandalay office, we could leave most of our stuff there, packed into a big plastic bag, which would be shipped to Yangon by bus.

Another reason why we thought Discovery Rides was the perfect pick for us, was the fact that they are the only motorbike rental company in Myanmar renting out Royal Enfields. Royal Enfield is the iconic British-Indian motorbike with which we had fallen in love already in India. Enfields are anyway quite a rarity on Myanmar’s roads, so we got many admiring stares on the way and the bike was a great conversation starter with the locals, as well.

One has to stay really focused in the chaotic traffic of Mandalay. Luckily soon we got out of the busy city. Despite having left the hotel two hours later than planned, around 9 am, we decided to have a stop at the famous U Bein Bridge since it happened to be almost on the way.

The 1200 meters long U Bein was built in 1850, making it the oldest teakwood bridge in the world. For many years it was also the longest one. This is a popular spot for sunrise and sunset watching, but it was a gorgeous sight also in broad daylight.

The long bridge crosses the Thaung Tha Man Lake, where fishermen are pulling their nets from the water and birds fly around, trying to catch something to eat. We spent at least an hour in this idyllic setting, admiring the views and chatting with local people. A young guy from Mandalay told us, that in his opinion this is definitely the most beautiful place around Mandalay.

Unfortunately, Seri managed to drop his sunglasses straight through a gap on the bridge into the lake. Being the first day of our road trip, the timing couldn’t have been worse. Driving on the dusty roads with an open helmet would not be too pleasant without sunglasses. Luckily, almost as soon as we continued our way, we saw a sunglass stand next to the high way. Maybe there are more sunglasses resting on the bottom of Thaung Tha Man Lake…

Through the peaceful countryside

Soon after U Bein we turned from the highway to a smaller streets, which took us through peaceful countryside. On the way we had a stop by a fruit stand, from where we got a giant drinking coconut. We were not far from Mandalay, yet, but judging from the curious stares of the people around us, they don’t seem to get many tourists around here.

Soon we crossed the border from the Mandalay area to the Shan state. After riding among fields for some time, the road started to elevate towards the mountains and the pavement turned to sand.

Driving on the relatively steep and curvy gravel road was good practice for the coming days. Seri was riding confident, but Johanna, sitting in the back, still felt a bit anxious, at least at the steepest curves. The skill of honking horn before every curve, which Seri had learned in India, proved to be very practical also here. That way the people approaching from behind the curve know to slow down and to stay on their own “lane” – not that there would have been too much traffic on the mountain road, though.

It took almost three hours to get from U Bein to the village of Ywangan. Already on our first day on the motorbike we had seen so amazing views and so many friendly smiles, that we almost couldn’t wait which awesome experiences the coming days would bring. At the same time, the first day on the road had been exciting and we were pretty exhausted after driving on the dusty roads under the hot Burmese sun. But still we managed to check out some things in Ywangan on the evening we arrived, and continued exploring the area the next day…

PrevPreviousMandalay – markets, veggie food and kidney stones
NextMyanmar on a motorbike, part 2: Adventures and misadventures in and around YwanganNext 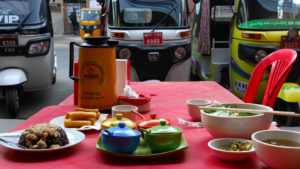 2 thoughts on “Myanmar on a motorbike, part 1: From Mandalay to Ywangan”