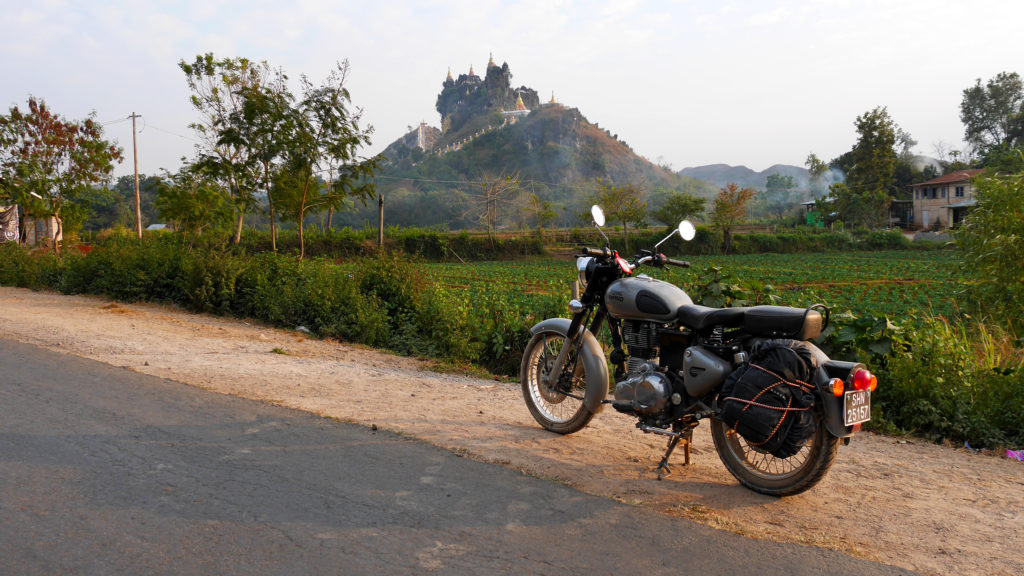 Myanmar on a motorbike, part 2: Adventures and misadventures in and around Ywangan

On our motorbike road trip from Mandalay to Yangon, we made our first over-night stop in the village of Ywangan. Ywangan is located in Myanmar’s Shan state, some 130 kilometers from Mandalay. We spent a day exploring the area around Ywangan and visited some sights off the beaten path. The surrounding nature is gorgeous, we saw some pretty cool places, but the day contained some blood, sweat and tears, as well.

Finding a place to stay

There are not many accommodation options in Ywangan, and even less info about them online. As soon as we arrived in the village, we saw a sign pointing to the Shwe Gu Gu Hotel. After seeing the comfy-looking bungalows and the lush garden, we decided to stay there. The bungalow cost around 30 000 kyat (20 euros) including a yummy local breakfast the next morning.

When we arrived at Ywangan, we were super hungry. We had a nice meal at the hotel’s restaurant and also ate there the next day. With English speaking staff, it was easy to get vegetarian food there. Also, we didn’t see many if any open restaurants in the village.

On the first evening of our road trip, we went to see the sunset from Shwe Pwint Lin pagoda, which was located near to our hotel. This was a great spot for sunset watching. Apart from a few playful dogs and an old monk, we got the gorgeous views for ourselves.

We started our next day with a cup of Ywangan’s specialty, coffee. Ywangan is Myanmar’s most important producer of Arabica coffee beans. The Genius coffee factory offers some tours on their farm a bit outside of the village, but we only visited the factory shop located right in the village. The local coffee tasted good – even for Johanna, who doesn’t even like coffee.

Ywangan is totally not, yet, on the tourist radar, but the most known tourist attraction nearby is a blue lagoon and a waterfall. These, too, would surely be interesting sights to see, but we had something else in mind. We had heard about a stalactite cave with a river flowing inside and were determined to find it.

The cave that goes by the names Yae Win and Sin Lal is located some 20 kilometers from the village of Ywangan. We got some driving instructions from our hotel and the location is also marked on the Maps.me app. Despite all the guiding, we managed to get lost on the way but got help from the friendly locals.

Finally, we found our way through all the bumps and curves to the cave and were instantly convinced, that getting there had been worth all the trouble.

We walked through a field following the river, until we came to the mouth of the cave. There we found a rickety wooden ladder leading to the dark cave. Being completely alone in the cave added some extra excitement to the moment, but we didn’t go very deep into the cave anyway.

We had heard that somewhere not too far from the cave would be an impressive waterfall. Finding it was easier said than done. We asked for directions from every person we saw on the way. Some local men even drew us a map. Still, after riding around for an hour, we hadn’t had a glimpse of the mystical waterfall.

When we finally admitted that we should give up, it was already too late. We had ended up to some small, remote road leading through some plantations. The unpaved road resembled more a construction site than an actual road. On top of a steep hill, we decided to turn back. Johanna, after calculating the risks, decided to get off the bike and to walk down. And indeed, an Enfield is not an Enduro – the next thing Johanna saw was Seri and the Enfield sliding down on the loose gravel. Seri was lying under the bike, there was some blood and the gasoline was dripping from the tank to the ground. At first, we were both quite shocked. We quickly turned the engine off and, together, got the bike back up. In the end, the bike had gotten only a few minor scratches and there was still plenty of gasoline left in the tank. Luckily, Seri also didn’t get too bad injuries, but some wounds on his hands, arms, legs, and self-esteem, and his only pants ripped. After treating the wounds with our first aid kit, we had to continue our way, as we were in the middle of nowhere.

When we got back to our hotel, the friendly personnel looked at Seri and wondered what had happened. Together we cleaned the wounds better. Our adventure this day had taken much longer than we had planned, and it was getting late. Still, after having a little break and calming our nerves, we decided to stick to our plan and to continue to our next destination, Pindaya.

On our way to Pindaya

On our way to Pindaya we checked out our last attraction in the Ywangan area, the Main Ma Ya Thakinpa pagoda. It’s located some 40 minutes ride away from Ywangan to the direction of Pindaya. The beautiful golden peaks of the stupas built on top of a karst mountain can be seen from the road, but we wanted to get up there, even though it was getting late. Both, the views from the top as well as the pagoda itself were impressive. We also met a funny group of young athletes there, who exercised by climbing the stairs up and down.

Despite leaving the pagoda before sunset, we had to ride the last kilometers in the dark and it was getting foggy, too. But surprisingly, the road was in a good condition, so it wasn’t a problem, though.

Just on the last kilometers before arriving to Pindaya, Seri suddenly noticed that it was somehow more difficult to steer the bike, and Johanna could also feel the wobbliness. The first thing to do the next day was to find a motorbike workshop to get the back tire fixed… 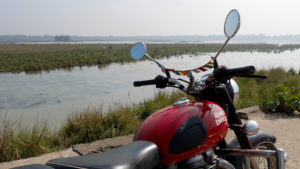 11 thoughts on “Myanmar on a motorbike, part 2: Adventures and misadventures in and around Ywangan”