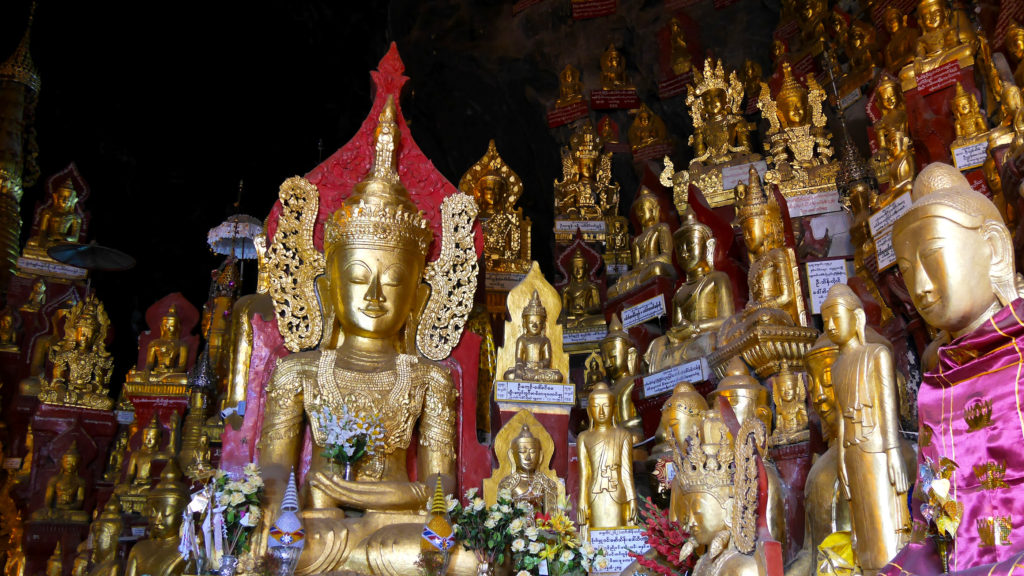 Myanmar on a motorbike, part 3: Pindaya and the 8094 Buddhas

Pindaya was the second overnight-destination of our motorbike road trip from Mandalay to Yangon. During our brief visit to the “Tuscany of Myanmar” we saw, besides the beautiful views and a motorbike workshop, a striking cave that was covered from top to bottom with golden Buddha statues.

Towards the Tuscany of Myanmar

There are two routes leading from Ywangan to Pindaya. The other one goes over the mountains, through some small villages. We would have liked to take that one, but since our adventures and misadventures in Ywangan took much longer than planned, we chose the straight, faster route, in the end. The views along this road were beautiful as well. Admiring the red and green valleys surrounding us, we started to understand why Pindaya is sometimes dubbed as the “Tuscany of Myanmar”.

We couldn’t enjoy the views too long, though, before it got dark and foggy. Usually, we would prefer to reach our destination before dark, but this time the road was in such good condition and the traffic so calm, that driving in the darkness wasn’t a problem.

Bad surprise upon arriving in Pindaya

Just when we reached Pindaya, Seri noticed that steering the bike had gotten harder. Johanna on the back seat could feel the wobbliness too. Luckily, we were almost at the Mountain View guesthouse.

The owner of the guesthouse welcomed us with enthusiasm. He congratulated us for living his dream – doing a motorbike trip in Myanmar. After talking about motorbiking and the Enfield for some time, he suggested we park it behind the house. He hopped on the backseat, to show Seri the way around the house to the parking entrance. Then he stated, that our rear tire was flat. Luckily, he promised to help us to get it fixed straight in the morning. He was such a kind and helpful man – later in the evening we saw that he had even covered the motorbike with a blanket.

We had some bad luck today. First the accident near Ywangan and now a flat tire. But we were happy that we had still made it to Pindaya, and really enjoyed relaxing the evening in the comfort and friendly atmosphere of the Mountain View Guesthouse.

Getting the motorbike’s rear tire fixed

As soon as we woke up, Seri rode to a nearby motorbike workshop with the guesthouse owner. Fixing the inner tube cost only 5000 kyat, around three euros. Judging from the shape of the puncture hole, we had driven over a nail or another thin, sharp object in the dark.

Pindaya cave and its 8094 Buddha-statues

After getting the tire fixed, and before heading towards the Lake Inle, we checked out the most important attraction of Pindaya. The striking Pindaya Cave is located on top of a steep hill, but we could drive almost to the entrance of the cave. This one was the complete opposite of the empty, natural cave we had visited near Ywangan the previous day, but in all its glory and glitter, the Pindaya Cave was a really impressive sight as well.

Inside this peculiar cave, one can find over 8000 Buddha statues (in January 2020 the exact number was 8094). The first one was brought there already in 1700s, but many of the statues are rather new. Inside the cave, there is even a maze made out of Buddha statues and a mediation cave that can be reached only by crawling through a small hole.

From Pindaya to Nyaungshwe by the Lake Inle

From Pindaya we drove to the village of Nyaungshwe, located by the famous Lake Inle, some 60 kilometers from Pindaya. The views on the way were at least as gorgeous as on the previous day, and the picture of the wine valleys of Tuscany just grew stronger… 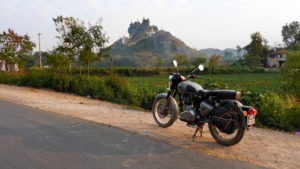 Myanmar on a motorbike, part 2: Adventures and misadventures in and around Ywangan