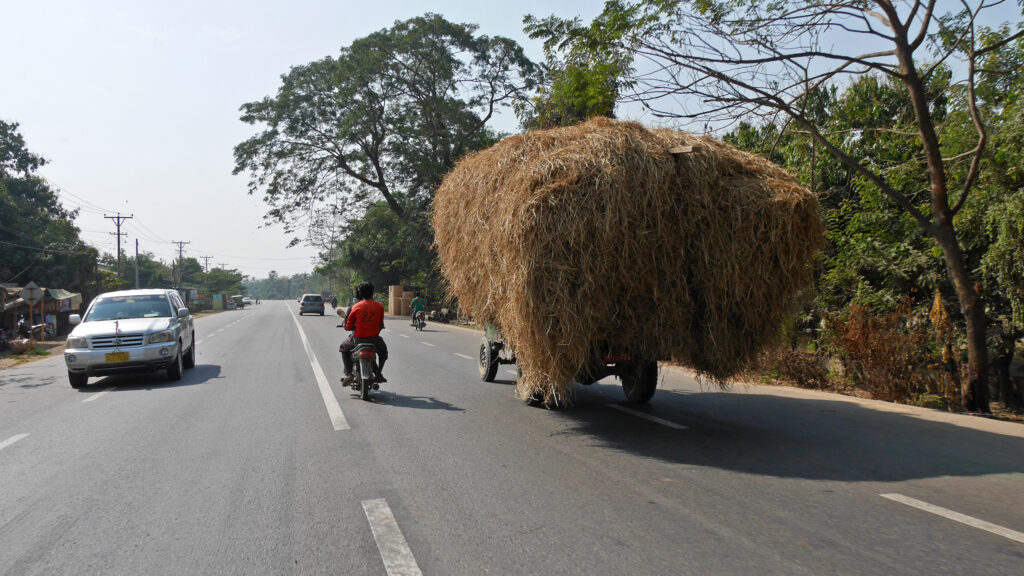 Myanmar on a motorbike, part 8: Last day on the road, from Taungoo to Yangon

Our amazing motorbike adventure from Mandalay to Yangon was about to come to its end. On the 10th and final day of our road trip, we drove from Taungoo to Yangon. On the way, we got to experience some culinary treats, pain in the ass, and reckless truck drivers. In Yangon, we had to say our goodbyes to our beloved travel partner, Royal Enfield.

We started the 10th and final day of our motorbike road trip in Myanmar by waking up with achy backs and butts in a city called Taungoo. We had arrived there the previous evening and didn’t have time or energy to do much, apart from sleeping and having a dinner with a few relaxing Myanmar beers after a crazy day on the road. The way from Taungoo to Yangon, where we’d return our bike, would be less than 300 kilometers. Anyhow, as we had learned from the previous days, the ride could take much longer than expected, so we didn’t stop to do any sightseeing on the way. We wanted to reach Yangon as soon as possible, as we would continue our way to Bangkok already the next day.

Day on the Old Highway

With a motorbike, we were not allowed to the Mandalay-Yangon Expressway, so we had to take the old highway. The word “old” could have referred to a really crappy road, so we were happily surprised to realize that the condition, in fact, was excellent. The road was also pretty straight without many curves, which was great, as we had had more than a fair share of sharp curves the day before. Of course, like every other day, there were some construction works going on, but even those were well organized and there was enough space on the sides to pass them.

We had two food (and drinking coconut) breaks on the way. The crunchy salad full of flavor, which we had at some small, basic roadside stand for breakfast, was so delicious. Definitely a highlight of the day and of our culinary experiences in Myanmar. We shared the little table with a local hairdresser dude and had a nice conversation with him.

Annoyances on the way

Besides the food breaks, we had to have many shorter breaks because of Johanna’s hurting ass. The backseat of the Enfield is relatively soft and comfortable, but ten days on it were too much. During the last hours of our road trip, she was almost crying, begging Seri to have the umptieth break in order to avoid her butt turning blue or it getting permanently damaged, lol. Might sound funny, but this is something that you should also seriously take into consideration when planning a longer motorbike trip, especially if you have as bony butt as Johanna does.

Apart from these unavoidable breaks, also all the trucks on the road made our journey a bit slower. Like motorbikes, also trucks are banned from the Mandalay-Yangon Expressway, so there were plenty of them.

Seri usually does manage to keep his calm while driving, but at some point, he totally lost it with the trucks and buses on the way. The people we’ve met in Myanmar have been lovely towards us, except for in the traffic. There many of them act very selfishly and reckless (and the bigger the vehicle, the bigger the ego…). When we started to near Yangon, we got to a long construction site where the lanes were narrow. Without exaggeration, we got there at least ten times into a situation where an oncoming truck or bus started passing another one last minute, driving directly towards us on our lane. Honking the horn didn’t make them even to slow down, so our only options in these situations were to get crushed or to break as fast as we could and to veer off the road.

Riding a motorbike in Yangon

Riding motorbikes is forbidden in the whole city of Yangon, at least in theory. There is no clear explanation why, but there are some rumors. According to one story, some biker had managed to piss some important general off so bad, that they decided to ban all motorbikes from the city. Some say that it has something to do with criminal motorbike gangs of the old days. The saddest explanation for the ban might be, that some politician would have lost their daughter in a motorbike accident and decided to ban all the motorbikes from the city because of that. Whatever the reason is, we had heard that lately no one has shown any interest in this rule, so we dared to ride into the city and all the way to Discovery Rides’ office.

By the time we got into the city, the oncoming trucks were not that big of a problem anymore, but the traffic was very chaotic anyway and google maps was leading us to streets that didn’t exist.

End of one amazing adventure

When we finally arrived at the office of Discovery Rides, we had been on the road for 10 hours. It’s quite much for a 300-kilometer journey… At Discovery Rides we finally got to meet the Finnish owner, Mika, and one of the workers, Mario, who had both provided us with priceless travel tips and helped us with many problems on the way. It was nice to get the faces for the familiar voices, and to share our experiences of the last days. No one could understand the joys and annoyances of road tripping in Myanmar better than these guys.

The last days on the road had been relatively tiring and demanding, so on the other hand, it felt almost like a relieve to return the bike and to be able to sit into a bus the next day and to let someone else deal with the driving for a change. On the other hand, it felt surprisingly sad to park the Royal Enfield for the last time. He had been our beloved travel partner for the last ten days and taken us on an adventure of a lifetime. Thank you, dear Enfield, and thank you Discovery Rides!

PrevPreviousMyanmar on a motorbike, part 7: The great adventure over the mountains, from Loikaw to Taungoo
NextOur last day in Myanmar – Exploring YangonNext 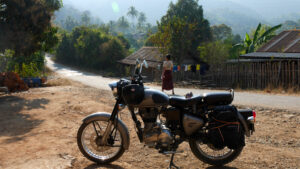 Myanmar on a motorbike, part 7: The great adventure over the mountains, from Loikaw to Taungoo

2 thoughts on “Myanmar on a motorbike, part 8: Last day on the road, from Taungoo to Yangon”